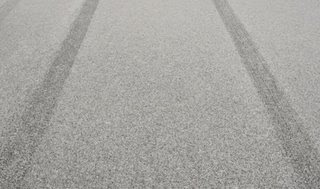 We were starting to think that winter would never arrive. Never mind the passing of the winter solstice, winter is only official when it snows.

Ta da. Late morning a sleety mix began falling, and by noon there was undeniable evidence on the streets.

Winter has arrived.
Posted by Gary at 12:33 PM No comments:

Email ThisBlogThis!Share to TwitterShare to FacebookShare to Pinterest
Labels: seasons

Fourteen year ago today, at 12:13 am, Andrea began her journey in this world. Almost a young woman now, she's perky and caring and bright -- a wonderful gift of life. May she continue to flower and use her gifts to make this world a better place.


Grant, her younger brother, placed fourth in the Nashua city elementary school cross-country races this morning. He was the lead runner on the boys team from his school. Now in his third year of cross country, he's made great strides (pun intended) in improving his time. More importantly, running has allowed Grant to find his own path to achievement. May this experience strengthen his confidence and be a source of courage when he feels at a loss.

And may I be ever grateful for these two beings who so enrich my life. Soon they will be adults and living lives of their own.
Posted by Gary at 3:10 PM No comments:

Boston to Chicago to San Jose

I was up very early this morning to make a 7:00 am flight out of Logan, with the first stop Chicago, to change planes, and then on to San Jose. After two days of meetings here, I will hop over the Sierra to Reno on Thursday afternoon. This will be my first trip back since your memorial service. Lori is flying out Friday, and we'll spend an extended weekend organizing and sorting. No doubt that we won't get everything finished, but that will just give me another opportunity to return in a few weeks.

It was a perfect day for flying. Although there was some high cloudiness, the skies were quite clear, making for a smooth ride across the continent. The route to Chicago skirted Lakes Ontario and Erie and descended over Lake Michigan. I was sorry that I didn't catch a glimpse of Chicago's tall buildings, a city where we both spent some time. The high peaks of the Rockies already have fresh snow, while the Sierras still show just the remnants of last winter.

There are many memories for us in various cities stitched across this land: Chicago, Denver, Dallas, San Jose, Reno. We have full lives in these places -- but for such short times compared with history. Wasn't it Robert Frost who said life goes on? How should we measure the legacy of one life? Or is that entirely the wrong question?

P.S. Today was the first day of the TSA's relaxed restrictions for bringing liquids and gels on board aircraft. As instructed on the TSA web site, my deodorant, shaving cream, tooth paste, and contact lens solution were in two clear sandwich bags, which I placed in the bin with my laptop. After passing through the X-ray machine, there was a slight delay -- apparently because I hadn't filled out a form on the entry side of security ( I didn't see that part on the TSA web site). The agent was in a quandary and checked with his supervisor, who agreed to send me on with my various potions. It seems rather strange that a multi-billion-dollar transportation system and the technology of multi-million-dollar aircraft is so easily stymied by a tube of toothpaste.
Posted by Gary at 8:06 PM No comments:

It was just a week ago, Sunday, August 27th.

Mother had slept peacefully throughout the night, not awakening nor even moving since the prior afternoon. The last response I saw from her was when Patty, one of the hospice nurses, stopped by Saturday afternoon to examine her -- actually to assess how I was doing -- and had asked Mom several questions. She wasn't really alert but acknowledged Patty.

I spent the night on the floor in the bedroom with Mom, dozing then awakening every hour or so to check that she was still breathing. It was regular and peaceful. Her eyes were half open, which is how she had been sleeping for the past couple of weeks.

When Stephanie, the caregiver, arrived Sunday morning, I went out for my walk downtown along the river, which had become my morning respite while in Reno. I had a list of items to pick up at the store and thought about doing so after my walk, but decided to first check in at home.

Tomi walked across the street to see Mother around 10:30, earlier than her normal Sunday afternoon visits. Tomi was aware that my mom's condition had deteriorated and had e-mailed me that she would be over during the morning.

As we were chatting, Tomi commenting about the change in my mom in just a week, I noticed the rhythm of Mom's breathing change. The duration was shorter, her teeth were closing during part of the cycle, and I could hear some slight congestion. I gave Mom a dose of lorazepam, noticing that the set of her jaw made it difficult to insert the syringe. I noted the dosage and time on the log: 10:55 am. Within a couple of minutes, her breathing seemed to relax.

"Gary, I think your mom has stopped breathing."

Hearing Tomi's words, I immediately looked at Mom and moved to her side. I thought I saw a short breath, then a stillness, then another short breath. Her eyes had opened more fully, as though she might be awakening. But the breathing had stopped.


That same morning, Mom's church held their 14th anniversary celebration. Each summer her church marked the passage of another year by holding a Sunday service at Idewild Park. Several had hoped that Mom might be able to attend this year, since she was such an integral member of the church community. But as the week progressed, Mom became much too weak to go anywhere. By Friday she couldn't get out of bed to get to the bathroom; Debbie, one of the hospice nurses, installed a catheter.

As the church's anniversary service ended, 32 balloons were released in memory of each member who had died since the church was formed. There was no balloon for Mom, but her spirit must have joined them as they made their skyward ascent.
Posted by Gary at 3:37 PM No comments:

A beautiful day to die

Shelly and I walked around Virginia Lake just after the sun had dropped behind the low-point of the Sierra, between Mount Rose and Peavine. A crescent moon was setting, and there wasn't a cloud in the sky. The heat of the day was waning with a slight breeze off the lake.

Debbie, the hospice nurse who examined you this afternoon, had commented that it was a beautiful day to die. It truly was. 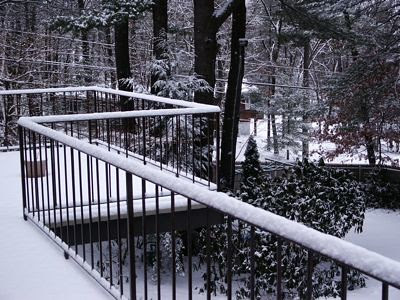 New Year's eve brought a fresh layer of snow to southern New Hampshire, at least a couple inches to recover the grass.