A World We Rarely See 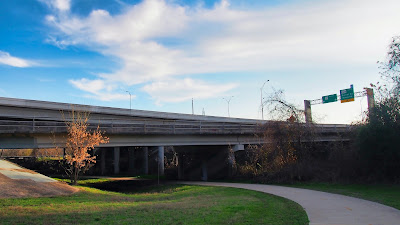 The freeway carries thousands of cars each day, north to south, south to north, the drivers unaware of the natural world off the pavement — a world, ironically, made accessible by another intrusion of civilization, a cement path.

My daughter’s apartment in Austin borders the Balcones District Park, which connects to the Northern Walnut Creek Trail on the other side of the MoPac expressway.

Walking the trail shortly before sunset, we encountered four deer crossing the concrete path from the northern woods to the trees on the south side, likely heading for water from the creek. They didn’t seem too concerned by the scattered people on the trail, an ironic benefit of being engulfed by a city where shooting deer is illegal.

Their world or ours?

These two worlds coexist, parallel yet largely separate, providing a peaceful spot in the heart of the city, away from the rush of life.

U.S. fears that Huawei is an existential threat to the security of western democracies, a Trojan horse for the authoritarian Chinese government, have precipitated a series of events building a digital divide, a divide separating the communications networks using Huawei equipment from those where it is shunned. The implication for data crossing both networks en route from user to cloud: you can’t get there from here. To be carried by Huawei (or ZTE) risks being copied and sent to Beijing.

We’re seeing the impact of this fear as the political rhetoric escalates:

In May, the U.S. imposed an expansive ban on suppliers exporting products to Huawei. Apparently, that ban has not sufficiently crippled the company. The Trump administration is reported to be considering additional export restrictions to prevent products manufactured outside the U.S. with U.S. technology from being supplied.

Under current regulations, key foreign supply chains remain beyond the reach of U.S. authorities, prompting inter-agency discussions within the administration of President Donald Trump about possible changes to two key rules that could expand U.S. authority to block more foreign shipments to the company, giving more teeth to Huawei’s blacklisting.

The U.S. continues to pressure other countries to ban Huawei equipment, particularly for 5G networks. Asking countries to choose sides is unlikely to eliminate Huawei and ZTE from the global stage, considering both offer very competitive pricing compared to Ericsson and Nokia.

Responding to its own existential threat, Huawei has accelerated development of internal technology, also seeking suppliers outside the U.S. Japan, Taiwan and Europe are the beneficiaries. Quoting China Daily, Mobile World Live reported Huawei’s imports from Japan are expected to reach $10.1 billion this year (2019) — a 50 percent year-over-year increase — and will come close to the reported $11 billion Huawei purchased from U.S. suppliers in 2018.

The first evidence of Huawei’s success is the new Mate 30 smartphone, which uses no U.S. components according to The Wall Street Journal. Huawei is also developing a mobile operating system as an alternative to Android, which it has named HarmonyOS or Hongmeng in China. As the world’s second largest mobile phone manufacturer, Huawei has the scale to develop its own operating system and force market adoption, particularly in China, home to the largest number of mobile phone users.

Responding to U.S. sanctions and advocacy, Huawei’s founder, Ren Zhengfei, has granted numerous media interviews to argue his company is not a security threat.

Beyond reassuring words, Ren said he will move Huawei’s North American research center from the U.S. to Canada, according to Canada’s The Globe and Mail.

Not as genteel as the company’s founder, Huawei’s lawyers are suing the FCC, claiming the agency’s action to block U.S. telecommunications operators from buying Huawei (or ZTE) equipment is illegal.

The Chinese government has been surprisingly quiet during this maelstrom, although it has defended its most successful telecommunications equipment manufacturer, most vocal protesting the arrest of Ren’s daughter and Huawei CFO, Meng Wanzhou. Canada arrested Meng at the request of the U.S., which is seeking her extradition to stand trial for illegal exports by Huawei.

Now China seems to be adopting similar tactics to the U.S. The Financial Times reports the Chinese government has ordered all government offices to replace foreign computer equipment and software within three years, a retaliatory blow that will hit U.S. suppliers Dell, HP and Microsoft.

These rancorous events suggest the growing digital divide between the U.S. and China won’t end well. Although Huawei is the lightning rod for U.S. concerns about national security, it’s simply a proxy for Chinese policy. Any long-term resolution will require a broad cybersecurity agreement between the U.S. and China, one based on trust and verification, borrowing a phrase from the nuclear arms agreements of the Cold War.

If there’s an engineering solution to this dilemma, it’s not obvious. Perhaps that should be the focus of 3GPP in 2020. The benefits of 5G will be hard to realize if our networks become islands disconnected by fear.

Note: This was first published as a post on my Microwave Journal blog, on December 13, 2019.