What's A Citizen To Do?

I'm feeling pretty powerless and dejected by the impeachment trial of President Trump. Through the investigation and impeachment in the House, the Republicans in both House and Senate have shown abject fealty to a president who would be emperor. While the senators are not allowed to speak during the trial, the other voices defending the president seem to be even more amplified and strident.

While I think the president is, without question, guilty of obstruction of Congress, I do see a defense for the charge he abused his presidential power: while the president’s attempts to use Ukraine and hurt the likely Democratic candidate for president were inappropriate, his actions may not justify removal from office. Yet no Republican has acknowledged that his actions were inappropriate. The talking points say the impeachment is a Democratic “coup” to overturn the 2016 election.

Fairness and reciprocity are strong values I hold, and blatant hypocrisy weighs on me physically. What’s a citizen to do?

It now seems the only hope of learning the truth — aside from awaiting the long judgment of historians — is for the Senate to call witnesses who have first-hand observations of the conversations and actions that led to withholding military aid to Ukraine. Four Republican senators are viewed as sufficiently moderate to at least consider voting to call witnesses: Lamar Alexander of Tennessee, Susan Collins of Maine, Lisa Murkowski of Alaska, and Mitt Romney of Utah. So I sent each the following email:

Your Role in the Impeachment Trial of President Trump

As a citizen observing the House of Representatives’ investigation that led to impeachment, I have no doubt that the President is guilty of obstruction of Congress. The evidence that his orders prevented the House from hearing from potential witnesses and reviewing all relevant documents is indisputable.

The evidence supporting the first article, abuse of power, is strong. Based on the President’s history in office, I have little doubt he has abused the powers of his office — and will continue to do so if unchecked. Nonetheless, I understand others believe otherwise. Hearing from the members of his administration who were involved in the Ukrainian discussions and withholding of military funding, such as John Bolton, should confirm this abuse of power or support the President’s claim that he is innocent.

I urge you to vote to call witnesses and gather additional documentation as part of the Senate trial, a logical and timely step to seek the truth about the President’s actions and motivation in withholding military aid to Ukraine.

As a member of the Senate, you stand on the threshold of history. I hope, for the sake of the country, you will choose the Constitution over fealty to the President.

The Dismal State of Our Political System

Politics has never been a landscape of kind discourse. Policy disagreements quickly decline to ad hominem attacks on an individual holding an opposing view.

President Trump has uniformly used this tactic to demean anyone disagreeing with him, probably thousands of times since declaring his candidacy on June 16, 2015. When he was elected President, I hoped the enormity of the election and dignity of the office would inspire him to shift his behavior. Unfortunately, he remains truculent, not hesitating to dishonor the dignity of anyone caught in his diatribes. 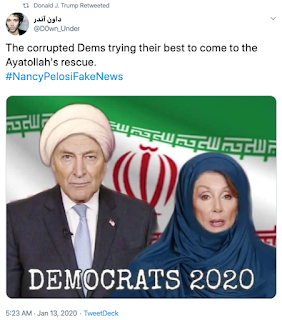 The President of the United States retweeting a disrespectful caricature of the Senate Minority Leader and Speaker of the House was inconceivable until Donald Trump was elected. Now it’s normal.

Although the factionalism of our politics started long before Donald Trump’s ascendency, his standard of behavior has condoned further deterioration of the already rancorous relationship between the political parties. His impeachment provides perhaps the most stunning example, with Republications taking up a full-throated defense of his call to the President of Ukraine, then his recalcitrant attempts to block any investigation by the House of Representatives.

Donald Trump is proving his outrageous campaign claim that he can “stand in the middle of Fifth Avenue and shoot somebody” and not “lose any voters” — apparently not any Republication votes in Congress.

The 2019 Christmas season is rapidly fading into Christmas past, yet before the discounted greeting cards and wrapping paper totally disappear from the stores, I want to reflect on one of President Trump’s campaign promises, to make saying “Merry Christmas” politically correct once again.

That’s one campaign promise where he’s claimed success, at least as far as uttering what he wants — which he certainly does, whether at a campaign rally or via his Twitter feed.

I’m speculating that this Merry Christmas kerfuffle is a reflexive response by those who feel they are losing their heritage or culture. That puzzles me, as I don’t see the loss.

If I managed a store catering to the community or a business with diverse employees, I’d go with “Happy Holidays” to be as inclusive as possible.

My intent is not to devalue or offend Christians. Rather, the choice of words reflects my intent to be kind and avoid offending someone who doesn’t find meaning in the Christian view of Christmas. It doesn’t matter that the majority of Americans are Christian, assuming that is really true, or that the first European immigrants who arrived in America held Judeo-Christian beliefs. Making space for another person’s beliefs doesn’t change what I believe nor threaten my beliefs.

The choice of greeting can be a sign of gracious hospitality acknowledging other beliefs and the right to hold them. Or, it can be a sign that the other person is not one of us — our myopic sense of a homogenized America — and not welcome.

I hope we can see beyond any feelings of loss to honor our neighbors, coworkers, and the strangers we meet. Namaste.