Should the US Government help the struggling auto industry?

Last week the CEOs of the Big 3 auto makers testified before Congress, asking for government funding to save their companies. Unconvinced, Congress told them to explain, by December 2, how any government money will be used.
The Bush administration remains opposed to using any of the $700-billion in Federal funding already approved to address the credit crisis. Treasury Secretary Henry Paulson said that would not lead to the necessary changes to sustain the industry for the long term. However, he also stated that bankruptcy would not be good, especially with the economy in recession.
Perhaps unfairly, US auto makers seem to be the poster children for an industry that has not served the market very well. The Japanese pioneered small, fuel-efficient vehicles in the 1970s and 80s and, more recently, hybrids. However, to give the US car makers some credit, they did invent the minivan and were satisfying the considerable demand for SUVs and Hummers until gas prices rose to $4 a gallon. Unfortunately, the industry was vulnerable: overly dependent on these large, gas-guzzling vehicles without the ability to respond quickly to changes in market demand.
Now the US industry is reeling. Sales are off dramatically. Auto makers are losing money and burning cash at an unsustainable rate. GM's stock price has cratered to just a tenth of its value a year ago. 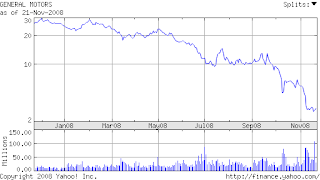 In his testimony before Congress last week, Rick Wagoner, the CEO of GM, argued that GM has taken the steps to position the company for long-term success. He wants government funding as a bridge to weather the current recession, claiming per-capital auto sales are the lowest since World War II. He also stated that if the industry fails, 3-million jobs representing $150-billion in people’s incomes will be lost in the first year.
Should the US Government help the struggling auto industry?
My initial reaction was “no.” In our capitalist system, companies compete to identify the market’s needs and develop products and services that offer the best value. Those that do, win our business. Those that don’t are usually not as profitable and are often acquired or may even fail as the market matures or the economy dips into recession. That’s just the life cycle of companies.  We may be at the point where the US can’t support the number of companies that are manufacturing cars. So why not let the market take its course, even if the Big 3 shrink to one or two survisors?
However, my free-market view is tempered a bit by the argument that these companies are too big to fail. I’ve heard that five people support every auto employee. You have the suppliers, dealers, transportation companies, and financing firms that are directly involved in the production and sale of cars, as well as the barbers and grocers and waitresses and doctors who serve those who work in the industry.
If we’re risking entire communities being impacted by any of these companies going under, then I wonder if there’s not a more humane and graceful way to deal with this crisis: a bankruptcy that would allow GM, Chrysler, or Ford to keep operating while restructuring. That’s what happened in the airline industry after 9-11: Delta, United, and US Airways kept flying.
Given the frozen credit markets today, GM, Chrysler, or Ford may not be able to secure private financing to carry them through bankruptcy reorganization. That’s where Government funding would be appropriate, to allow them to keep operating while building a bridge to the future. However, I would not feel comfortable with the Government simply handing over $25-billion with no defined expectations or accountability.
That’s probably not going to happen, though. More likely, the Congress will want to become too involved in the operation and strategy of these companies, which I equally oppose.

One last suggestion: The next time the Big 3 CEOs come to Washington, they should drive all night from Detroit in their most fuel-efficient vehicles, rather than flying in their respective corporate jets. That will play much better to the nation’s current mood of populism and sacrifice.

Gary
I remain inspired by blogging, a thoughtful way to formulate and assess ideas. This is a public journal of my personal thoughts.

“The pure and simple truth is never pure and rarely simple.”—Oscar Wilde “There are more things in heaven and earth, Horatio, than are dreamt of in your philosophy.”—William Shakespeare “Learn why the world wags and what wags it.”—T.H. White &#147Educate and inform the whole mass of the people. They are the only sure reliance for the preservation of our liberty.”—Thomas Jefferson “I never know what I think about something until I read what I've written on it.”—William Faulkner