Why I hate politics - one more example

A scene from the latest political theater:

Republicans and Democrats are battling over the budget. Republicans want to cut spending to trim the deficit and to align the government's policies with their own philosophies. Among the lightning rods: Planned Parenthood, which receives some $360-million from government grants and contracts (per Planned Parenthood's 2008-2009 annual report) and provides abortions (although, by law, federal funding cannot be used to provide abortions, so the federal dollars are used in other areas).

Jon Kyl, U.S. Senator from Arizona, made the following statement on the floor of the Senate: 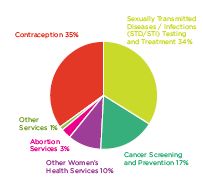 However, Planned Parenthood's 2008-2009 annual report shows only 3% of its services are abortions (see pie chart).

When the discrepancy was pointed out to Senator Kyl's office, they advised that the 90% figure was “not intended to be a factual statement.”

Just what is that supposed to mean? If we were arguing over a few percentage points — Kyl said 95% and the number was actually 91% — then Kyl's argument is valid. But the difference is between the implications of totality and minimal. Kyl's number is not even in the ballpark.

To not issue a substantive correction reeks of politics and a lack of integrity, so much so that I felt compelled to submit the following message to Senator Kyl's web page:

Shame on you for grossly misrepresenting Planned Parenthood's services and then having the audacity to defer any correction by stating that your statement was not intended to be factual.

While I respect (although disagree with) your opposition to abortion and Planned Parenthood, your tactics reflect a disappointing lack of integrity — especially considering you are a United States Senator.

Fortunately, in this 24x7 cable news and Internet age, Kyl's misleading statement and clumsy parry have generated considerable commentary and satire (see below). Bowing to the pressure, Kyl has revised his remarks in the official public record. No apology, but the “well over 90%” phrase is long gone.